*This is a ticketed event*

On Friday 22nd July, On The Beach has invited Fatboy Slim to headline its festival grounds – situated on the hallowed beach where it all began. The global music superstar’s return to his home turf, Brighton Beach, is set to be the liveliest event of the year – and your only chance to witness the inspiration behind those spine-tingling scenes from two decades ago!

On July 13th 2002, UK music history was made when 250,000 ravers flocked to Brighton Beach for a party unlike any before or since. Widely regarded as the UK’s answer to Woodstock, the legendary event brought the whole city to a standstill, turning the entire beach into a writhing mass of happy smiling faces. Dancers clung onto anything they could just to get a better view of the maestros Fatboy Slim and Midfield General as they served up the now-seminal soundtrack. The official mix compilation still remains a cult favourite two decades later and the mythology around the event has only grown in the years since. It’s impossible to understate the immense legacy left by Big Beach Boutique. 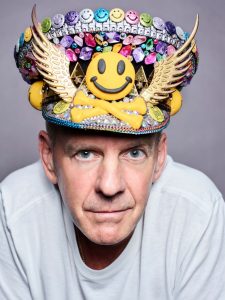 As an artist, Fatboy Slim’s contributions to dance music over years are second to none. From underground hits to mainstream chart toppers, he has sold millions of records around the world, holding the Guinness World Record for most Top 40 hits and winning nine MTV Video Music Awards and two Brit Awards. Just as famous for his explosive and super-sized live shows as he is for his music production, be it headlining Glastonbury, closing down the London Olympics or even playing at the House of Commons, Fatboy’s household-status doesn’t just come from the radio, but from the memories inspired in generations of hedonistic party goers. Simply put, there is no one quite like Fatboy Slim.

The return of Big Beach Boutique is set to be one of the year’s most memorable parties and if you want to be first in line for tickets to this monumental celebration, then make sure you sign up at http://www.bigbeachboutique20th.com/ to be a part of the exclusive pre-sale, beginning at 10am on Wednesday 30th March.
This huge news comes on top of the already announced On The Beach weekend shows, featuring Carl Cox and special guests playing on Saturday July 23rd, and drum & bass pioneers Andy C, Sub Focus, Wilkinson, Shy FX, Dimension, Friction and Harriet Jaxxon playing on Sunday July 24th