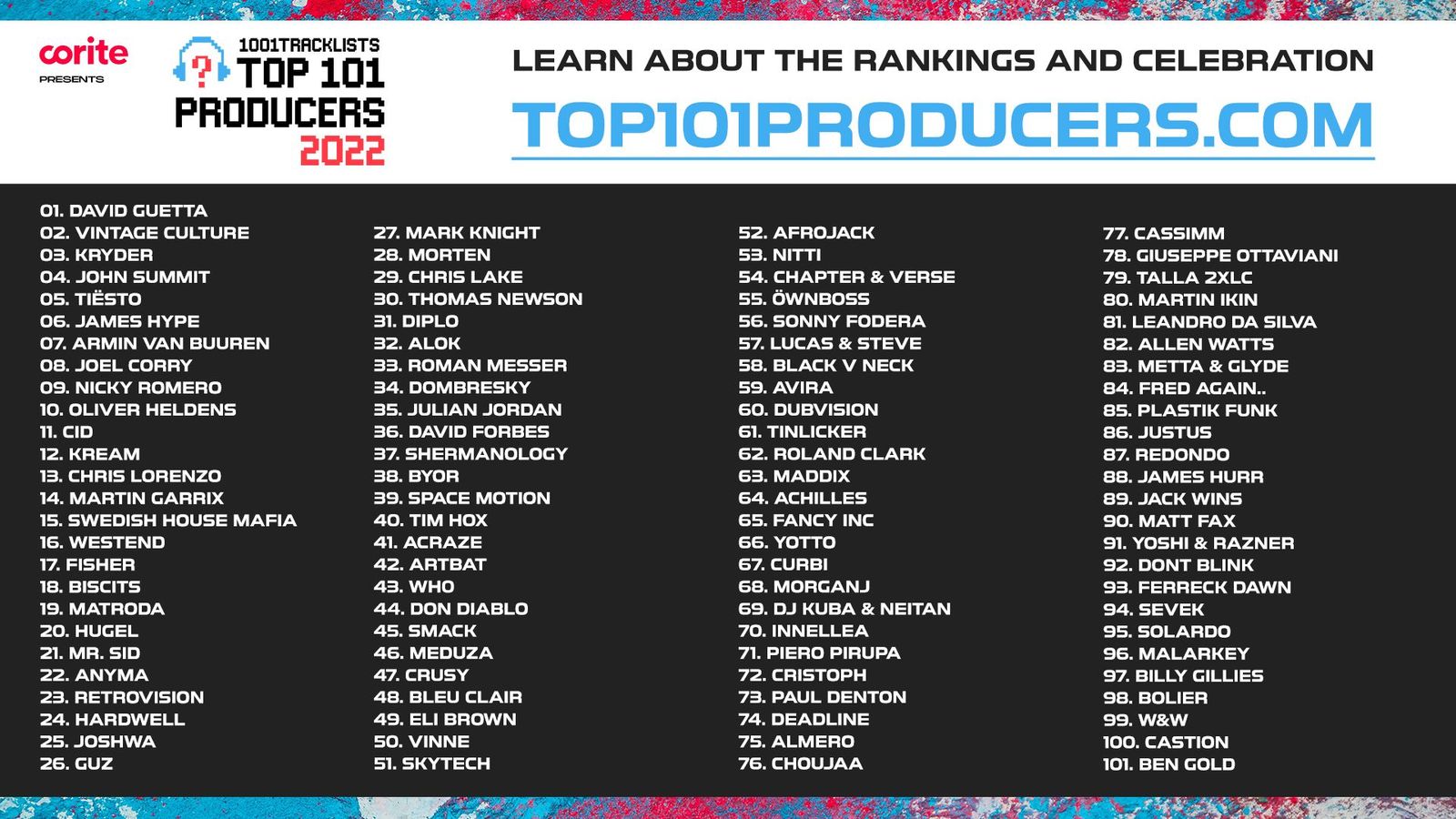 1001Tracklists have also released the ‘Future Of Dance’ List spotlighting 101 women and POC artists alongside the Top 101 Producers. Together with Corite they have created 1/1 NFT trophies for select artists, with all proceeds going to the ‘Future of Dance Fund’ to support underrepresented artists in dance music over the coming year.
The sold out celebratory Top 101 Producers event and livestream will take place on Thursday, October 20, with award presentations and surprises for all those in attendance in Amsterdam and watching at home.
The Top 101 Producers 2022 are here and there’s no denying the impact that David Guetta had this year across his solo releases, Future Rave collabs with MORTEN, and underground Jack Back records. With an unmatched output and a soundscape that touches all corners of electronic music, he’s a truly deserving champion.
The Top 101 Producers showcase the artists whose productions have been supported the most by DJs around the world. It’s a 100% data-driven ranking, and something that is very unique in the music industry. The rankings are calculated by summing up each artist’s unique DJ support between October 1, 2021 and September 30, 2022.
22 countries are represented in this year’s rankings, led by the Netherlands (25 artists) and the UK (24 artists) who had by far the greatest representation. Other countries which had strong contingents are Brazil (8 artists), the US (8 artists), France (6 artists), Italy (6 artists), Germany (4 artists), and Spain (3 artists). The following countries were also represented: Australia, Canada, Croatia, Denmark, Finland, Indonesia, Ireland, Morocco, Norway, Poland, Russia, Serbia, Sweden, and Ukraine
Coming in at #2 is last year’s champion Vintage Culture. He put together another incredible year of releases on Insomniac and Defected, highlighted by collabs with James Hype, GOODBOYS, and Sonny Fodera, and has been in serious demand on the club and festival circuit around the globe.
Finishing in third place for the second year in a row is Kryder. “Piece Of Art” was an enormous release for the Ibiza based DJ/producer and he has become one of the most sought after remixers in dance music.
After taking home his first Top 5 finish last year, John Summit has remained burning hot and moves up one place to finish at #4 in this year’s rankings. Singles “La Danza” and “Human” led the charge for the American who continues to impress with his consistent production output balanced against a packed global touring schedule.
Crossover record “The Motto” led the way for Tiësto, who rounds out the top 5 and who has now finished in the top 10 for every edition of the rankings.
2022 features 34 artists making their first appearance in the Top 101 Producers, as well as 9 artists re-entering the rankings. Westend at #16 is this year’s highest new entry, followed by Anyma at #22, Joshwa at #25, and Thomas Newson at #30. This year’s biggest movers are HUGEL, who is up 73 places to #20 this year, and James Hype who has climbed 61 spots to #6. ARTBAT rose 52 places to #42, CID is up 49 spots to #11, and ALOK has moved up by 32 places to #32.
To elevate the Top 101 Producers concept in 2022, 1001Tracklists has partnered with Corite, a blockchain based, fan engagement platform that combines traditional label services like marketing and funding with web3 products such as NFTs and play-to-earn mechanisms. Together, 1001Tracklists and Corite have created 1/1 NFT trophies for this year’s artists, many of which will be available to win via raffle at https://corite.com/1001 starting on Wednesday, October 19th. 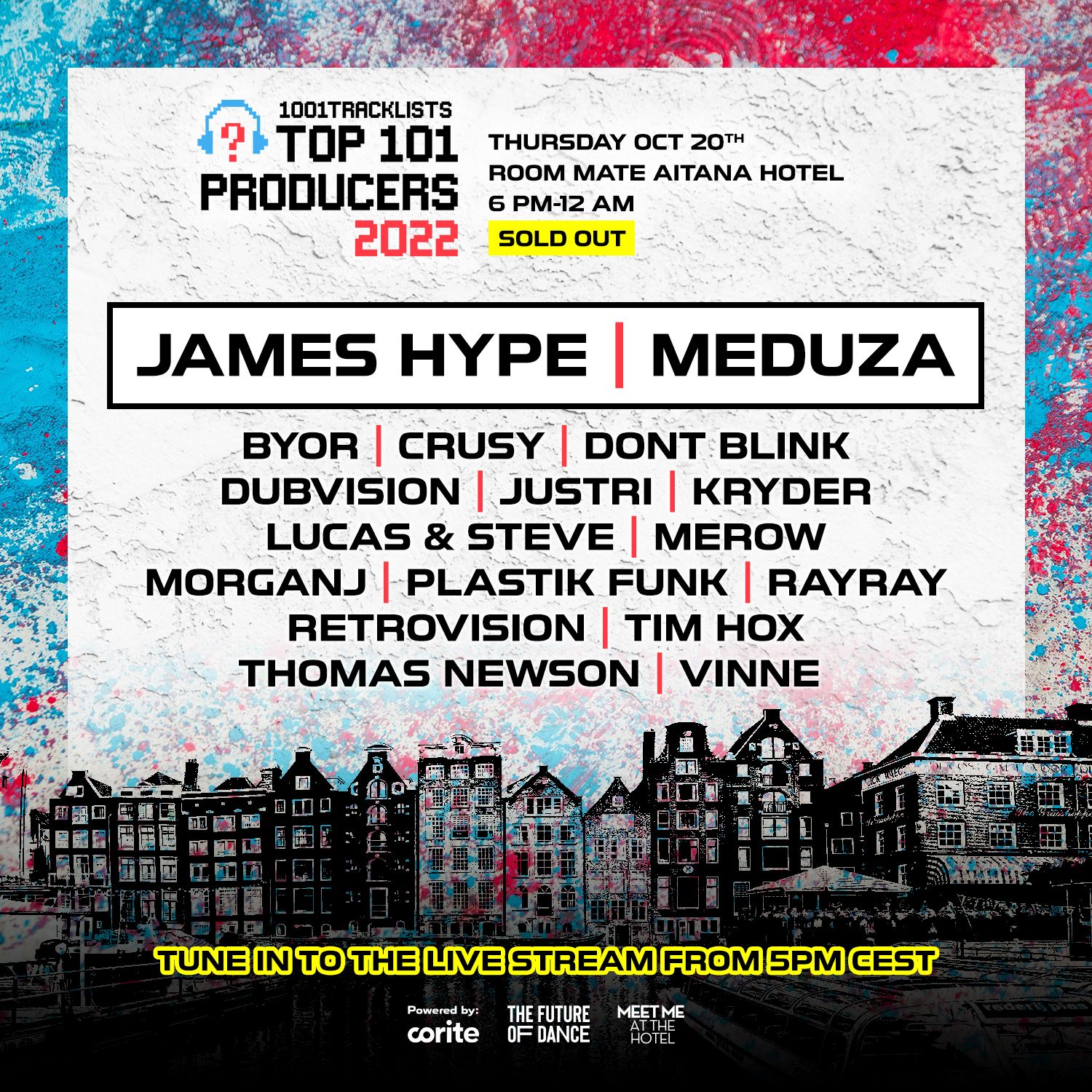 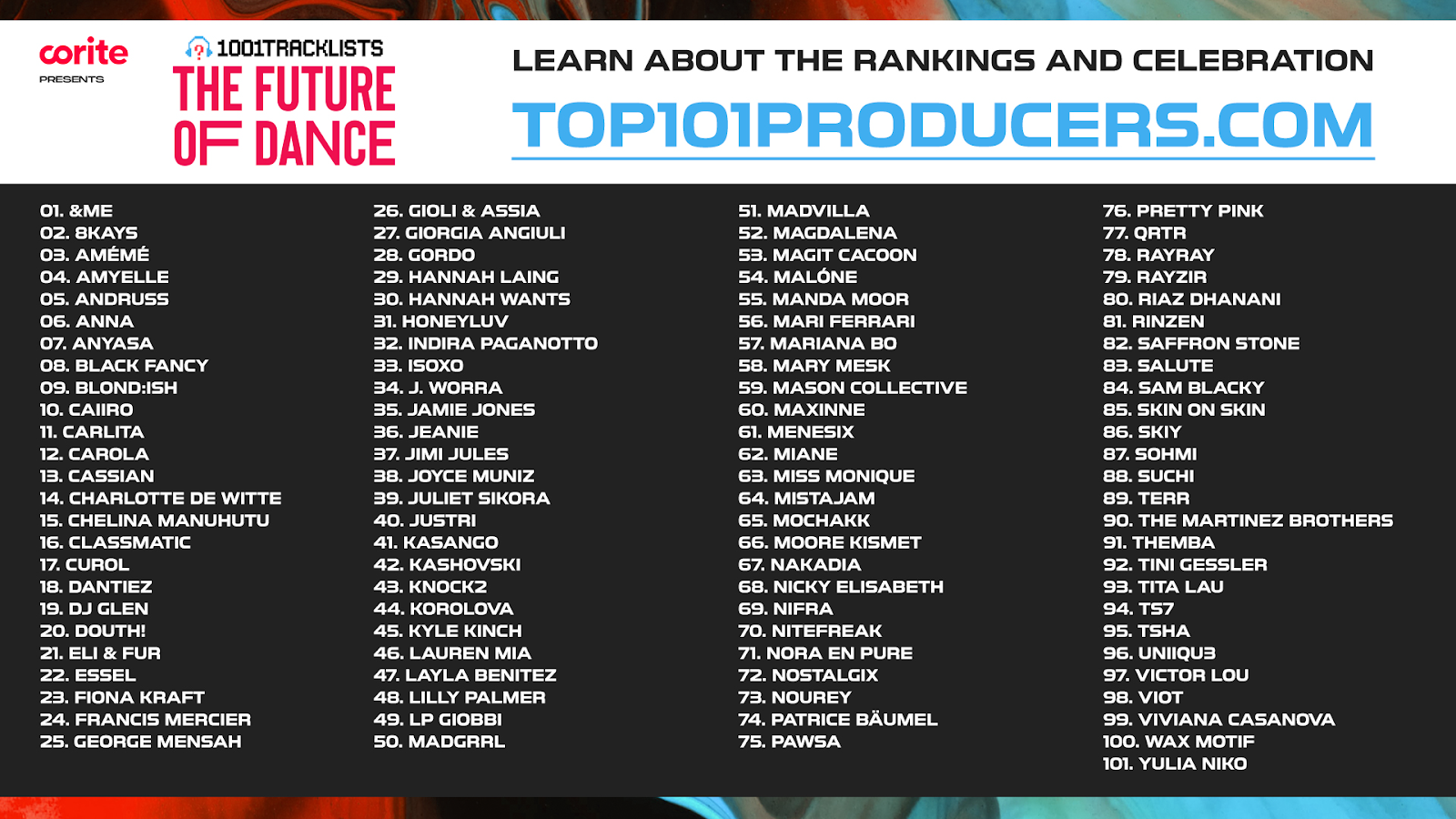 1001Tracklists are hoping to make steps towards changing the electronic music industry with the ‘Future of Dance.’ Released alongside their annual Top 101 Producers rankings, the platform has also published a list of the 101 Female and POC artists that have played a huge part in the dance music scene over the past year.
First conceived last year as a selection of 60 artists, for its second year, 1001Tracklists has ensured that the list is given equal weight as their Top 101 Producers by matching the amount of featured artists as well as publishing both on the same day. Born as a result of an ongoing lack of representation and empowerment within the music industry, the Future of Dance is not just a list – it’s a movement to inspire greater change in the dance music scene.
On Wednesday, October 19th, 1001Tracklists hosts its inaugural Future of Dance event at Soho House Amsterdam and will feature sets from some of the most inspiring female and POC artists over the last year including Andruss, AmyElle, Caiiro, ESSEL, Francis Mercier, George Mensah, Hannah Laing, Joyce Muniz, Juliet Sikora, Rayzir, Saffron Stone, and Selena Faider. Striving for more inclusivity in the electronic music community, 1001Tracklists has made it their mission to create global opportunities exclusively for minority groups, offering a platform for them to showcase their talent, as well as developing their careers further. 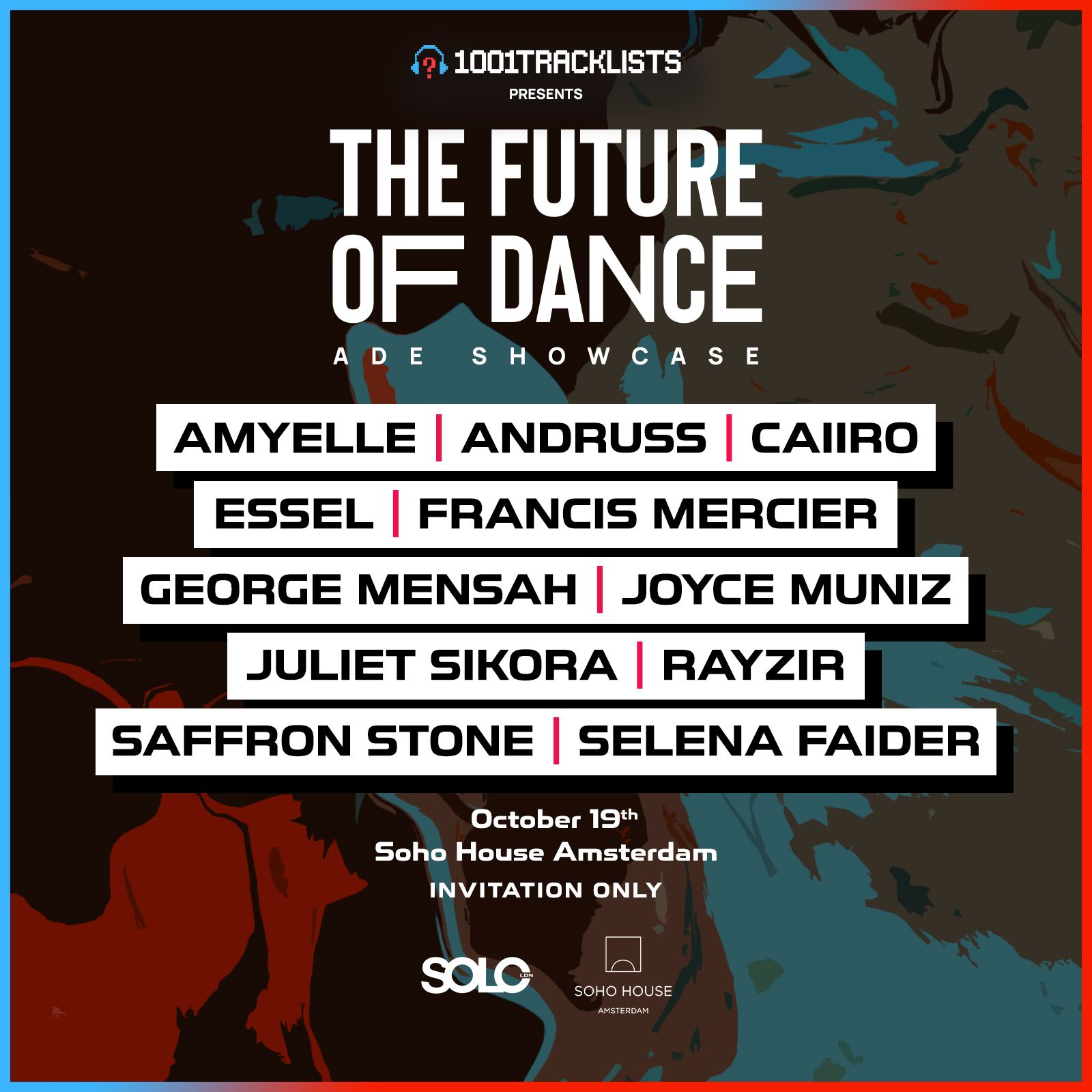 1001Tracklists and Corite are also teaming up to start the ‘Future of Dance Fund,’ a charitable collaboration project which will support and showcase 12 artists from November 2022 to October 2023. The fund will deliver financing, marketing, and other support to underrepresented dance music artists each month.
The Future of Dance Fund will come from the charity raffle for the Top 101 Producers & Future of Dance NFT trophies held at https://www.corite.com/1001. Individual funds raised from each NFT raffle will go directly into an aggregate pool, which will be split evenly between the 12 monthly selections receiving support over the upcoming year.
For more information about the Top 101 Producers, the ‘Future Of Dance,’ head over to: www.top101producers.com
About 1001Tracklists: 1001Tracklists is the world’s leading DJ tracklist database, home to over 400,000 tracklists to date. While providing tracklisting and listening for festivals, radio shows, DJ sets, podcasts, and promo mixes, 1001Tracklists has built a comprehensive database and a devoted international community, firmly establishing itself as the Wikipedia of dance music. Because of its unique insight and transparent data, the 1001Tracklists website has become a trusted reference point, industry standard, and leading media brand in electronic music.
About Corite: The Corite platform empowers artists to engage their fans in new, mutually beneficial ways by allowing fans to become backers, supporting the artists’ vision, work and music. By launching fan-funded campaigns on Corite, artists can generate additional revenue streams prior to releasing music, allowing for enhanced marketing and promotional release strategies, while simultaneously rewarding their active backers with a portion of the royalties. The Corite platform employs fan missions that enable fans to earn fan power, which can be used for physical and digital rewards such as NFTs, digital merchandise, VIP tickets, meet and greets, and more.